This website is still under construction. Please don't pay too much attention to it.

I kept it simple on purpose.

It works with Drupal (a Content Management System) and it can be extended quite massively if necessary.

Why ? Because it runs on a Virtual Machine -provided by Gandi.Net- where I can add CPU cores, RAM, Disk space, Bandwidth... =)

For the moment you will find only two objects in the objects catalog but there's a lot of things missing !

I'll be cleaning what I did last years in the coming months and post them here. There's a type of 3D-printer which you never saw. Stackable Dodecaedrons... and many many other ideas. <3 !

I am professionnal in Computing and Electricity.

My other passions are : Rollerskating and Video-games (where I use "meta-4" nickname or "[340]meta-baron" some years ago).

One of my best reference is at LOTUS DEVELOPMENT bought by IBM in 1995.

Exactly at that time and since 1993, I was a specialist on the famous program Lotus Notes/Domino a pioneer in Groupware. Since then I specialized on Php/SQL using what I learnt about "Working Together" the famous Lotus tagline.

I started being a freelance right after working for Lotus and felt in love with the Open-Source Movement. Learnt to work on Linux and developped my own CMS rapidly replaced by Drupal in my work : making websites and complex back-offices with HIGH returns on investments ! (like the one for Ligarena and the ESWC written in Php/mySQL in 2000)

Check out my Linkedin profile to learn more about me as a professional programmer since 1994 and passionate gamer since 1980 on Atari 2600 on which I discovered my first pixels with 6 years old eyes...

Just to be exact : I wrote my first program at 14 years old with my cousin Alexandre Mendes in Paris on a Amstrad CPC464 which was a Solitaire game way before multiplayer games like Doom. Nothing special here. I'm from this lucky generation who played with first personal computers.

Here is a picture of us at the Gamer's Assembly organized at the Poitier's Futuroscope (I think in 2005? got to check that) :

Right now I'm focusing on 3D-Printing since 2013 which makes 7 years of experience already ! =)

I use RepRaps for many reasons : It's the first open-source hardware 3D-printer, and it was the cheapest machine you could build. Check RepRap.Org for more informations ! GowGowGoooo ! =)

2009 : I saw my first RepRap in Paris at the /tmp/lab in a demo by Alexandre Korber from Usinette.org at that moment. Thank you so much Alexandre. =)

2013 : First REPRAP MendelPro built at home at night and 15 Kg of PLA 3D-Printed ! First clients who show interest in the objects and proof that they are sellable ! Thanks again to MixArt-Myrys and TetaLab.

2014 : Transformation from "MendelPro" to "Prusa i3 Rework", with the help of eMotion-Tech. Started to work for Tournefeuille's Mediatheque with Arduino workshops and of course 3D-Printing on RepRap and 3D Modeling on Blender.

2015 : I worked as freelance for Tournefeuille's "Mediathèque" close from Toulouse in very hard conditions on my part but excellent help from their staff... btw rooms were crowded at maximum which is a very good point. I had 8 slots and had to manage 10 to 11 people almost each time! Sessions were on Sunday from 09am to 12am then 2pm to 5pm just to let people enjoy the rest of the saturday (chosen by the management). I was paid 375€ per Saturday there but they only happened 6 times in the year. One day I hurt myself the day before and couldn't go so the new director asked me to completely stop which was a "no pity" style management for a freelance tbh... The workshop ran super well each time ! People were very happy... that's why I'm so sad about that relation with the Mediathèque.

I also built my *second* RepRap bought in part from EricDuino and eMotion-Tech for the missing Nema17 steppers. Eric is a super-huge RepRap fan and several times national champion on "Line Follower Robots" with the Airduino team from AIRBUS (word play with 'arduino' and 'airbus'). 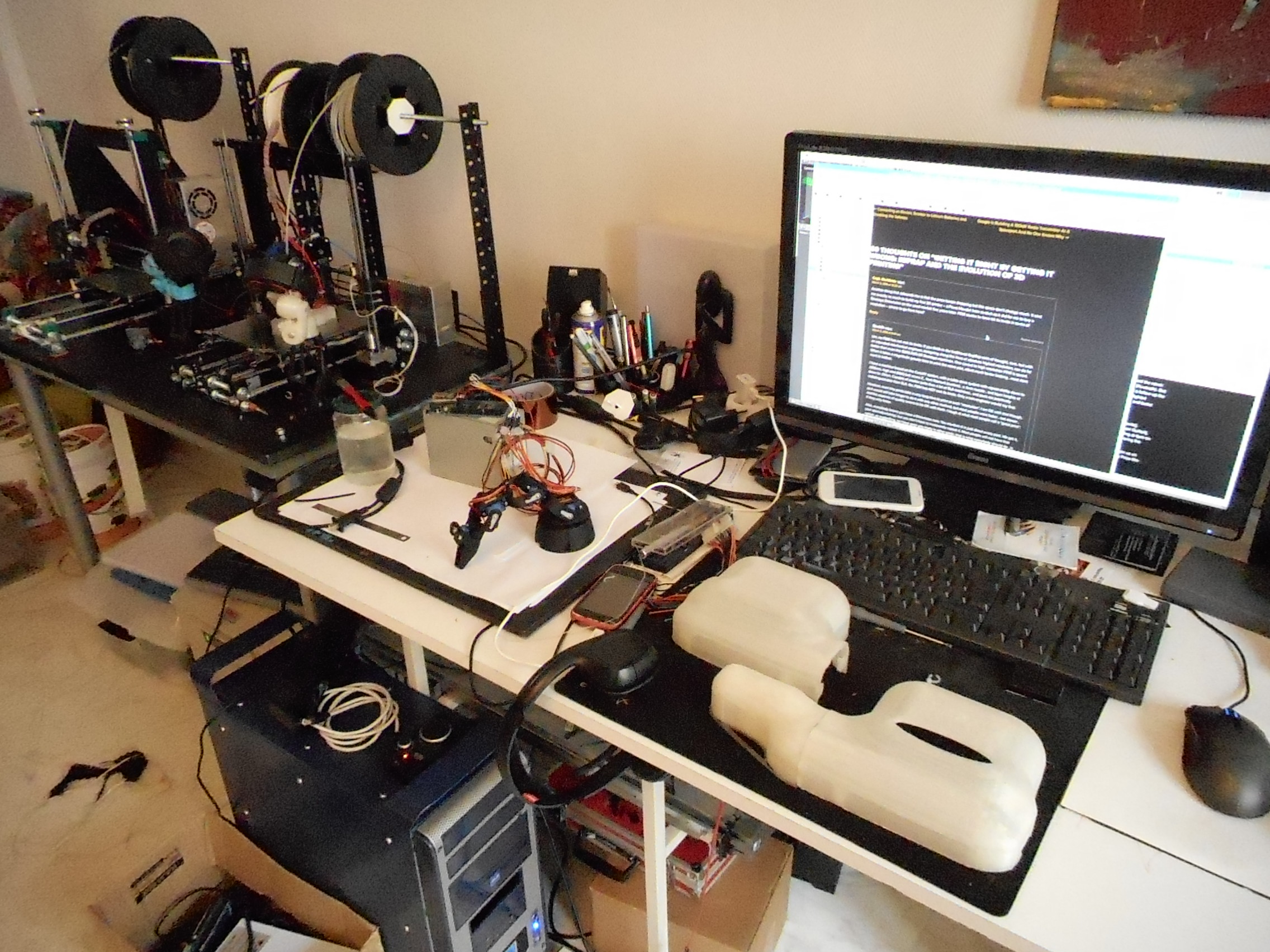 Well I let this video online but this is old now. My new setup is not mobile anymore.

This concept is quite huge : 3D-Printing where it's necessary ! (I'm 100% sure of its potential)

This was in Toulouse. I still use this funny van painted at Mixart-Myrys by 3 different artists: Dark, Mikoz and Dwarf-One. <3 !

2017 : Moved from Albi to Santiago-do-Cacèm - Portugal with still some travels to Toulouse with my blue Renault Trafic !